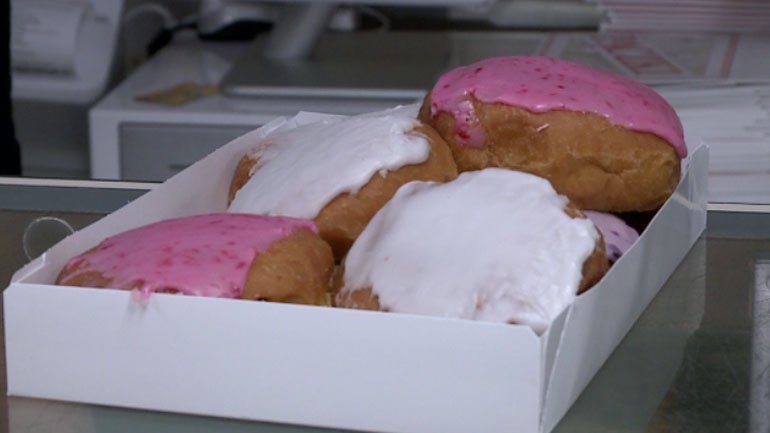 “We’ve got the music in the background and [it’s] just wonderful,” Kim Newbauer said after picking up her pączki . “I think we all should be dancing right how.”

“I would say probably in the last 10 years or so it’s really grown,” said Grebe’s Bakery President Brandon Grebe.

And it’s continued to grow into the single-biggest day on the bakery’s calendar.

That’s about five times the amount of dough they use on a typical day for donuts.

“They have a variety of flavors,” said Newbauer. “So I just said, ‘two of each.'”

So what makes these Polish treats so sought after? Well there’s the part of production that’s pure Wisconsin.

“We steal secrets from the beer and cheese-making process,” Colton Grebe said. “So all of our donuts go through a fermentation process, which is very unique for a bakery in this day and age.”

And there’s the history behind a fourth-generation, family-owned company that started with Great Grandma Irene back in 1937.

“She started baking for the PTA, making butterhorns that we still currently make today with her recipe,” said Brandon Grebe. “Then my grandpa got into it. Then my dad, and now it’s our brothers and I.”

For the Grebes, it’s a family affair that goes back almost eight delicious decades. Everything Interesting About Donuts Grebe’s Baked Goods In The News The Best Lunch In Milwaukee